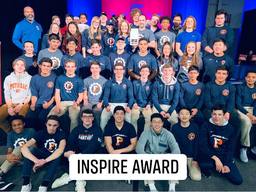 Congratulations to the incredible members of our Upper School robotics program! This past weekend, Potomac sent nine of our 12 teams (12A, 12E, 12F, 12G, 12H, 12J, 12M, 12N, and 12P) to the State Championship in Doswell – and rocked the event. Not a single Potomac team had a losing record!

Eight out of nine Potomac teams (12A, 12F, 12G, 12H, 12J, 12M, 12N, and 12P) made it to elimination rounds. As part of the fifth-seed alliance, 12F made it to the quarterfinals. Teams 12A and 12G joined forces as the second-seed alliance and reached the finals. In the skills challenges, 12A ranked third, 12E ranked sixth, 12G ranked seventh, and 12F ranked ninth. These accomplishments mean that 12A, 12E, 12F, and 12G have all been invited to compete in the World Championship.

Meanwhile, Potomac won a third of the awards that the tournament gave out! Team 12E won the Innovate Award in recognition for team members' unique use of sensors and excellent automation of their scoring mechanism. Team 12G won the Amaze Award, which is the second-most prestigious award given to a team. Finally, the Potomac program as a whole won the Inspire Award, which is testament to how far all five robotics coaches have taken the program this year.