Potomac is Victorious at the Tournament of Champions 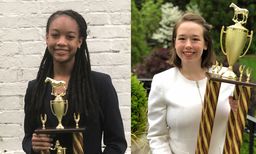 An unprecedented 14 Potomac School students competed in the prestigious Tournament of Champions for speech and debate at the University of Kentucky in the last week of April. Qualifying for this national tournament is in itself an accomplishment, and winning in any of its divisions is very difficult – the competition is fierce and the judges adhere to the highest standards. The Potomac contingent performed admirably, giving the tournament their all.

Notably, Virginia state champion Christian Herald ’21 excelled in the Original Oratory division. The sophomore advanced over more experienced senior competitors again and again, until she was defeated in the semifinal round.

Kay Rollins ’21, who is currently ranked #1 in the United States for Extemporaneous Speaking, was seeded second after the preliminary rounds and breezed into the final. Ultimately, Kay won with ease – like Christian, she was pitted against many older competitors, and she walked away with first place in her division. Kay joins an elite field of female extemp competitors who have won a national championship