Jonathan Wilson '98: Where Local is National

This election’s conservative candidates are running on the platform that less is more. But what does smaller government really mean? In part of a series for WAMU 88.5, DC’s leading public radio station, Jonathan Wilson ’98 reported in August on the effects of impending spending cuts on one of the area’s most abundant resources: federal workers.

“While the rest of the country is talking about shrinking government,” says Jonathan, “a lot of people [in the DC area] may have a different perspective because they actually rely on the federal government for their jobs.”

He found that federal workers do indeed have a different perspective — lots of them. “Federal workers are not a monolithic block politically,” he says. “They are taxpayers just like the rest of us, and thus have widely varying opinions about how best to use the American people's money.”

Perhaps most surprising, young government workers seem upbeat about their job prospects. Unlike older generations, Jonathan reports, a younger worker might not expect to stay in the same job, or even the same industry, for his or her entire career. A government position might instead be a stepping stone to a more advanced position in the private sector, so long-term job security isn’t a top priority for the incoming generation of federal employees.

Of course as an employee of public radio, spending cuts could threaten Jonathan’s own job security. “I understand that in tough times there isn’t as much money to go around, but I would hate to see federal support for public broadcasting go away altogether,” he says. “I love where I work, and I think we provide an important service.”

That service involves exposing the community to new ideas and telling the stories of people, such as federal employees, who might otherwise go unheard. “That’s rewarding for me,” says Jonathan, who didn’t become interested in journalism until his senior of college, but who always wanted to give back. “I think that's something that Potomac really supported: the idea of doing something good.”

Jonathan urges Potomac students interested in political journalism to take advantage of the resources in the DC area. “You don’t have to take a stand one way or the other. There are tons of different ways to get involved,” he says, naming, for example, the National Press Club. “We live in maybe the most powerful city in the world, so there's a lot to learn.” 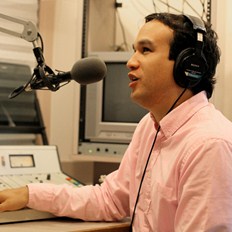 “I think that's something that Potomac really supported: the idea of doing something good.”