A decade ago, indie-rock guitarist Matt Stinchcomb fell into a job with an online startup. Today, he’s testing the power of business to do good.

As Matt Stinchcomb ’93 tells the story, his career as a business executive was born in a most unusual way. In 2005, seven years removed from his Oberlin College studies in art history, he was playing guitar in a New York indie-rock band and making ends meet with a side business in T-shirt screening and printing. A friend who had launched an online startup asked Matt to join the company and handle marketing.

“I don’t know anything about marketing,” Matt protested.

The story captures in a nutshell the essence of Etsy, Matt’s company for almost a decade now. An online marketplace for artisan-crafted handmade and vintage goods, the Brooklyn-based Etsy thumbs its nose at many conventions of business. One analyst has dubbed it the “antibusiness business.” Founder Rob Kalin, Matt’s friend, once declared that maximizing profits for shareholders is “ridiculous.”

Yet Etsy today is one of the online world’s hottest ventures, with the website recording sales of more than $1.35 billion in 2013, its best year ever. And it thrives in part because it breaks from the MBA’s blueprint to make people, not profits, its core mission. More than a million artists, artisans, and collectors sell unique creations through Etsy, and many wouldn’t survive without it. Like Whole Foods and other organic grocers who promote foods from small, independent farmers, Etsy brings the work of the little guy to a mass audience. Over time, the company hopes to spark a movement that upends the big-box retail mindset and remakes the economy, with dramatic benefits for all.

It’s Matt job to make sure Etsy hews to these lofty goals. Now the head of the company’s Values and Impact team, he works to ensure that company decisions big and small reflect its mission and more than just the bottom line. “We feel our core values throughout the organization, and we talk about them a lot,” says Etsy merchandising specialist Emily Bidwell, a friend from Potomac’s Class of 1993. “But Matt and his team are sort of an internal watchdog to make sure our actions match our values and what we say.”

Matt got his start in the Internet world in 1997, when he arrived in New York with his Oberlin degree but no job. Out for a drink one night, he met up with Sophie Simmons ’90, whose boyfriend worked for a digital media company that was hiring. “I knew nothing about the Internet,” Matt says. “I think I had been online once. But it was the height of the first dot-com craze. You could get a job by just walking into a bar.”

Matt stayed in digital media for a few years but quit in 2000 to launch a music career. He had begun playing guitar while at Potomac, and with three friends in New York had started French Kicks, an indie band with roots in garage rock and post-punk music. The four cut their first album in 1999 and soon were touring fulltime. The “bass is gritty, and drums pop,” wrote one admiring critic, who praised them for picking “substance over flash.”

Living in Brooklyn, Matt became housemates with Rob Kalin, who was just out of New York University with a degree in classics and a nascent business in furniture design. Like Mark Zuckerberg, who started Facebook while at Harvard, Rob was brilliant yet eccentric. He had attended half-a-dozen colleges, aspired to sell wooden computers, and made his own underwear. He was also visionary. In 2005, Rob seized upon the idea of creating an online marketplace for sellers like him—artists and artisans who lovingly made unique, handmade goods. He dubbed the new venture Etsy after watching the movie 8½ by the Italian director Fellini (etsi in Italian means “oh, yes”).

Rob started Etsy with two engineers, then recruited Matt to join them as head of marketing. The timing was good: Matt had left French Kicks and was about to get married to his longtime girlfriend, Benedikta Karaisl von Karais. He plunged into building the company and spent long hours with Rob. After he and Beneditka married, Rob came along on their Catskills honeymoon so he and Matt could work.

With few preconceived ideas about business, Matt threw out what he found crass or crazy in traditional marketing and set out to build an Etsy community not too different from the French Kicks following. He and Rob traveled from town to town, organizing meetings with groups of artists and makers. “It was like being on tour trying to build a community of fans for your band,” he says.

Emily joined the company not long after Matt. (Her mother, Cynthia Shea ’61, went to Potomac with Matt’s mother, Stephanie deSibour ’60). A fine arts graduate from Hampshire College, she had come to New York to be a part of Brooklyn’s growing community of artists and design a line of jewelry. Rob brought her on at Etsy to manage relations with the increasing number of artists selling through the website. Like Matt, she had little experience in business, but she was an artist who knew the challenges facing Etsy sellers. “We wanted to create a place where people like us—painters, sculptors, photographers, and other creators—felt like they fit in,” she says.

Today, Etsy has 500 employees, 30 million members of its online community, and a website available in nine languages. It sells goods from more than 200 countries—decorative pieces, kitchen goods, bath and beauty products, furniture, and much more—and customers can search by category or through storefronts with dedicated pages for each business. There’s little ordinary fare, as items ranging from personalized cutting boards to a Bavarian antique plate emblazoned with a kitschy portrait of a Roswell alien.

As the company has matured, more traditional business execs have arrived, including veterans of Yahoo and Google. Rob Kalin left the company in 2011, amid talk that Etsy was suffering growing pains that had to be managed by professionals.

By that time, Matt was heading up Etsy’s European operations. In 2010, he opened its first international office, in Berlin, then another in Amsterdam. But even as he built out Etsy abroad, he began to think about how the company’s growing size gave it increasing responsibilities. He read British economist E. F. Schumacher’s landmark 1973 treatise Small Is Beautiful: Economics As If People Mattered, which argues that a business dedicated solely to the hunt for profits can’t be sustained. In 2011, he organized Etsy’s first conference for small businesses, which concluded with the resolution that focusing only on economic growth “is unethical, unsustainable, and unfun.”

Working with new CEO Chad Dickerson, Matt and others developed five core values for the company, including: “We are a mindful, transparent, and humane business” and “We keep it real, always.” At the same time, the company launched an effort to earn certification as a B Corp., a seal of approval akin to a LEED certification for a building.

Companies that win B Corp certification go through a rigorous assessment that measures their efforts to solve social and environmental problems as well as foster a happy, healthy workplace. In its initial assessment, in May 2012, Etsy scored 80 out of a possible 200 points, the minimum needed for certification, with relatively low marks for environmental and community impact—a surprise for a company that considered itself progressive. Etsy quickly organized a “Hack Day” to bring all its employees together to plan how to do better, and Matt and his team set to work turning their ideas into reality.

In one of its bigger initiatives, the company now tracks and quantifies Etsy’s impact on the environment. Consumption of electricity in the offices dropped about 20 percent in 2013, and the company saw a similar reduction in the waste it sent to the landfill. Matt and his team also developed a Gross Happiness Index based on the work of University of Pennsylvania professor Martin Seligman. When a survey of Etsy employees found that most put high value on acknowledgement of their work, they created the Ministry of Unusual Business, an internal group that anonymously thanks employees for unusual efforts with notes and small gifts. Last year, 80 percent of Etsy workers reported they were satisfied with their job.

Ultimately, Matt believes Etsy can make the biggest impact by helping individuals start and grow their own businesses. Through forums and workshops in artist-rich cities such as San Francisco and London, the company teaches its sellers—known as Etsians—about business and provides tools and data. It’s also partnered with the town of Rockford, Ill., to create an entrepreneurship program for underprivileged adults. The goal: help anyone with a craft skill build a business.

The work continues. Matt is investigating running Etsy’s web servers out of data centers powered by renewable energy sources, and the company recently joined with Kiva, the nonprofit microlender, to guarantee that Etsy sellers can get a loan to pay for training, new equipment, supplies, or others—loans that banks and other lenders typically won’t make to businesses as small as many Etsians.

Ten years after joining with Rob Kalin and Etsy, Matt has learned a lot about traditional business practices. “I’ve also grown up a bit in how I think about business,” he says. “We have a lot of MBAs here now, and that’s not so bad.”

Still, he believes Etsy’s real work has little to do with conventional business strategies. He will continue to keep it weird, and push the company to always follow its heart. 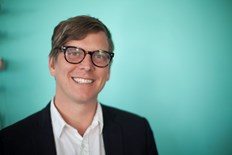 "My job is to make sure we keep it weird.”