Mark Shriver ‘79 Remembers His Father in A Good Man

My brother Bobby was playing football on the lawn in Hyannis Port one summer day in the mid-1960s when he ran into one of our cousins, fell down, and slowly but surely started to cry.

Dad heard him but didn’t look his way. Instead, he walked straight toward my brother and lifted him up.

Growing up a Kennedy cousin, Mark Shriver ’79 had to contend with the pressure to be not “just” good, but great. That pressure might have come from his extended family, but never his father. Sarge Shriver, founder of the Peace Corps, the Job Corps, Head Start and numerous other social programs, also found time to nurture his children, to whom he wrote tomes of letters, many of which he slipped under their childhood bedroom doors.

Mark went on to serve on the Maryland House of Delegates and a variety of boards and task forces related to social equality and justice efforts. Today he is Senior Vice President of US Programs for Save the Children, as well as a husband and father of three. In his memoir exploring his father’s legacy of love and hope, Mark inadvertently reveals something any good man might have trouble owning up to: his own goodness.

In your book you draw a sharp distinction between two simple words: good and great. Tell us about that difference.

There are a lot of so-called great people, who maybe have a lot of money or are politically powerful, that, when the lights are off and no one is paying attention, are not good people. Two waitresses that served my father lunch at his favorite restaurant for 35 years said, “Your father’s a good man.” I think that’s what goodness is about: it’s treating everyone the same regardless of whether they’re a big shot.

Does being a good man in the home and other small arenas also make the world a better place?

I think so. If you’re good to your grandchildren and your spouse and your family, then they, in turn, will model some of that behavior in your neighborhood, in your community.

What made your father so good? Is the answer religious faith? Where did that deep faith originate?

My father grew up in a family that was quite religious. I think his mother and father definitely believed [in their religion] and believed in the call for social justice: feeding the hungry, clothing the naked. I think the fact that he survived the Depression on scholarships in high school, university and law school, and survived brutal combat in the war, strengthened his faith. And I think it demanded acts of hope and love, [namely] his work to desegregate the Catholic schools.

Is other-centeredness something that can be learned? How do you take a step in that direction?

I think it’s a daily battle, and I think that’s why my father went to mass every day. He took that 30–40 minutes to ground himself and get ready for the day, to acknowledge that he needed help and support from God. I think that gave him his incredible energy. Paradoxically it also slowed him down to realize that everything was from God and that he needed to appreciate that. People do that in different ways. I don’t think they have to necessarily go to mass. I don’t go to mass every day. Some people meditate, some run, some swim, some just spend quiet time trying to ground themselves in what’s important. But I think it’s a daily thing.

Why do you suppose our country has become so divided? What would your father say?

I think political campaigns have always been battle grounds. The difference is that after the campaign, people were willing to make compromises to move the country forward. “Compromise” has become a dirty word on both sides of the aisle, and that’s unfortunate. I think people focus on, “Am I better off than I was four years ago? If I’m not better off, I’m voting [for] the other party.” People are concerned only about themselves, or predominantly concerned about themselves, because politicians have led us that way. Not just political leaders but all kinds of leaders have tried to put us into different groups: red or blue, religious or not religious, White or Black, instead of trying to see what we share. I think that’s what’s negative with the political system right now; it divides instead of trying to unify.
My father always told me that he thought it was crazy that Kennedy said we’re going to put the first man on the moon, but it gave the country something to rally around. He also rallied people around the Peace Corps. There doesn’t seem to be anything like that right now.

What do you think have been the main accomplishments of the Peace Corps, which your father founded?

I’ve met Peace Corps volunteers who work on Capitol Hill as politicians who say it was the most profound experience of their lives. Here at Save the Children, a lot of the senior management team are Peace Corps volunteers and that’s true in other international aid organizations. They’re trying to make a difference in helping shape American society to be more understanding of different cultures and people. I think that makes our country stronger. So it’s not only the services the Peace Corps volunteer provides in other countries, but also how they help make the United States a more tolerant, more accepting country.

Your father called for young people to be warriors for peace. Are today’s youth more or less politically energized than they were in the ‘60s and ‘70s?

A lot of the young people I talk to are trying to make a difference. If you look at what happened in the Middle East last year, those [revolts were staged] in many cases by young people. [In the United States] I don’t see the same protests that you may have seen in the mid-‘60s against the war, but I think that young people are trying to make a difference in other ways by creating nonprofits, by using technology to affect social change. Some of it gets a lot of publicity; some of it doesn’t. But I really get a strong sense that people that are 35 and younger really do care about the world.

What advice do you have for young people who want to become truly engaged citizens?

They ought to pick something they’re passionate about and then do something about it. It doesn’t have to be the work that my father did, creating these huge government programs or huge nonprofits like the Special Olympics. I think efforts in neighborhoods and communities can make a big difference as well. Keep in mind it may not work out, the first one, two or three experiences. Just keep plugging away. If the organization is disorganized and doesn’t work well, keep at it and try to improve it, or try another organization. 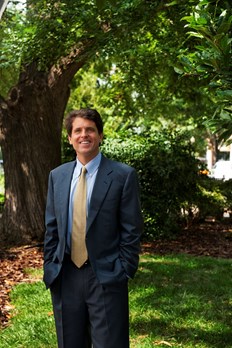 "A lot of the young people I talk to are trying to make a difference ... by creating nonprofits, by using technology to affect social change. Some of it gets a lot of publicity; some of it doesn’t. But I really get a strong sense that people that are 35 and younger really do care about the world."