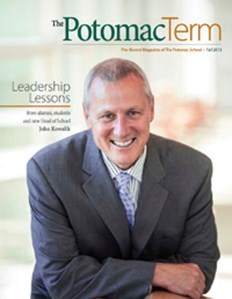 David Ritter ’93 takes kids into the treetops and teaches them the rewards of a stiff challenge Head northwest from Washington, DC, into Maryland, past strip malls and Starbucks and onto a two-lane road dotted with stands selling sweet corn and fresh peaches. Turn onto a gravel road and drive onto a 165-acre farm that is like no other. Inside the barn is a giant climbing wall. Rappelling ropes dangle from the roof’s support beams. Outside, an 850-foot zip line stretches over a pen of goats and a vegetable garden. A ropes course is tucked into a lush forest that backs onto the C&O Canal.

This is the home of Calleva Outdoor Adventures, a nonprofit that runs camps and outdoor-education programs with grand ideals. In this idyllic setting, just 40 miles from 1600 Pennsylvania Avenue, kids come for thrills, fun and the chance to learn what it takes to be a leader.

The farm is a dream come true for David Ritter ’93, one of Calleva’s directors. As a child in the Lower School, David fell in love with the outdoors. Now, after a few years of hair-raising travel and wilderness expeditions, he’s teaching kids the lessons he’s learned from a life spent taking on challenges of all kinds.

David grew up as a kid bound to hate school. Dyslexic, he struggled with reading and had to repeat the first grade. As he got older, he relied on almost daily tutoring to get by and proved a handful in the classroom: “I was never malicious, but I was definitely disruptive. Everything I did was about ‘Look at me, look at me.’ ”

Still, David loved Potomac. His teachers, he said, made learning a great adventure unto itself. He can name each of them, including Sarah Corson in the Lower School (“She focused my energy without making me feel like a problem”) and the Middle School’s Winifred Edelson (“She made me feel special and smart. I still think of her when I reach my goals”).

The School’s focus on the outdoors helped David thrive. He has vivid memories of Lower School science classes on the pond and trips to the wilds of Virginia and Maryland. Physical challenges gave him a sense of accomplishment he rarely got in the classroom. “When you go climbing and get up a rock, you get an immediate reward,” he says.

His passion for the outdoors grew after graduation. At a boarding school in the Berkshire Mountains, he founded a mountain rescue team and led a trek to climb volcanoes in Mexico. At Hartwick College in New York, he created an outdoor-education major and mounted an expedition to climb Alaska’s Mount McKinley—a trip that saw his group stuck at high altitude for six days. One semester found him traveling solo in India, sleeping in the streets.

After graduating college in 1997, David knocked around the country for a year, exploring and living out of his truck. He returned home with a plan to become a teacher, like his Potomac role models, but with the outdoors as his classroom. For a short time, he ran his own outdoor-education company, but he missed working in the field. Calleva was a friendly rival, and the two companies merged, with David taking over ropes course instruction and staff training for caving, rafting and other activities.

Instructors and staff at Calleva see the farm as a giant learning laboratory—for themselves and the kids. They built its roughly two dozen structures on their own, picking up the skills and know-how to raise the barn and construct a saw mill, a horse arena and nearly two dozen other structures. They used only reclaimed material or wood milled at the farm. Ritter recently fashioned a shed for his ropes-course gear out of old tires packed with dirt.

The joy of discovery drives Calleva. Though David hated chemistry in school—“I didn’t like big and little letters next to each other”—he and a few other staffers taught themselves how to build a biodiesel reactor to make farm fuel from waste vegetable oil. The reactor is now the centerpiece of a sustainability education program in which kids study and build projects for rainwater collection, alternative fuels, solar collection and more.

While Calleva offers traditional adventure-camp fare such as kayaking, backpacking and horseback riding, its specialty programs are growing. Five years ago, David’s brother, Ben ’95, and a few others fenced off part of the horse pasture and planted a small vegetable garden. That plot has grown into a full sustainable agriculture program that attracts as many as 40 school groups a year. A Calleva harvest brings in apples, peaches, cucumbers, peppers, radishes, a vast array of herbs and more, with some produce sold to high-end DC restaurants such as the Tabard Inn and Azur. A host of animals roam the farm, including chickens, cows, goats and pigs.

School groups who spend a couple days in the agriculture program work a full cycle of food production; they plant crops, harvest food, cook it and then sit down for a feast. Ben, a former professional drummer and Capitol Hill staffer, revels in the discoveries they make. “Some kids are obsessed with chickens; you could leave them in the pen all day,” he says. “Others are shocked to learn that food from the ground has dirt on it.”

Several Calleva programs teach leadership skills through individual and team challenges. In the most dramatic, kids walk across a bed of hot coals sprinkled across fresh sod. No one gets burned—the coals sink into the soft grass—but the kids don’t know this as they gird for their firewalk. “They learn that what they thought was impossible is possible,” David says. “And then they can look at other challenges and say, ‘If I work at it, that’s achievable.’ ”

David designed Calleva’s ropes course specifically to teach leadership and teamwork skills. The course has more than a few thrills—one puts kids in a harness and on a log suspended 30 feet in the air—but each element forces participants to consider how their actions influence those of others and affect the success of the team as a whole.

In one element (called the May Pole in homage to Potomac’s spring event), teams work a series of ropes to raise, lower and maneuver a hook into position to snare a series of duck decoys. In another, kids in groups navigate steel cables strung 10 inches off the ground, almost like a family of Wallendas on the high wire.

Not every kid embraces Calleva’s challenges. Many are “overhelped” in their daily lives, David says, and don’t know what it’s like to take a risk or work at something hard. But those are exactly the kids who can benefit most. “I want them to meet challenges on their own, to struggle, to fail and to learn to ask for help—and to offer help,” he says.

Ultimately, he hopes kids learn what he did: that the most rewarding life is one filled with challenges and learning. 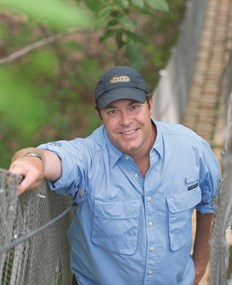 " I was never malicious, but I was definitely disruptive. Everything I did was about ‘Look at me, look at me.’ ”