It’s a simple but powerful idea. When you walk in the shoes of others and feel their pain and hardships, their hopes and dreams, your life changes. And when you connect deeply with someone, the experience can transform you.

For a number of Potomac students, volunteering with the Red Rose School in Kibera, Kenya, has been just that sort of experience. Since 2007 some 40 Upper School students have worked in Nairobi’s massive slum, helping children in extreme poverty with little to eat and little chance of getting a decent education.

“These kids who have nothing were so excited to be at school,” remembers Allison Fisk ’08, who went to Kibera before her senior year at Potomac and again in 2011. “When you see all the challenges they face and how very determined they are to succeed, you can’t help but be inspired.” Allison’s work with Red Rose led her to major in international relations at Tufts, with a focus on Africa. She studied abroad in Tanzania and made a documentary film about the school. Volunteering there, says Allison, who’s now in filmmaking, can have enormous impact on a teenager: “You can handle what you are seeing, and you have a chance to make a difference.”

An alternative to the overcrowded public schools, Red Rose serves about 250 Kibera children ages 3 to 12. The slum has few government services—no electricity, no running water or sanitation. Still, the kids are happy, says Alex Prezioso ’12, a Duke sophomore who volunteered after his sophomore year at Potomac. “They are always smiling and asking questions about you—who you are and why you are here. That stays with you.”

Ken Okoth, who grew up in Kibera, started the volunteer initiative when he taught world history at Potomac from 2005 to 2009. As a child, he lived in a 12-by-12-foot shack with five brothers and sisters. Though there was never enough to eat, his mother instilled in her children the importance of education, and Ken pursued every opportunity for learning. First came a scholarship to a boarding school in Kenya. Next, while doing odd jobs and delivering newspapers in Kibera, he waged a campaign of pleasant persistence in St. Lawrence University’s student-exchange offices—which happened to be on his newspaper route—and won a spot at the New York school. In 2005, he earned his graduate degree at Georgetown’s School of Foreign Service, and now, at 36, he is a rising leader in Kenya, representing Kibera in Parliament.

Bringing Potomac students to Kibera, Ken says, builds a bridge for them to the larger world. The Kenyan children, meanwhile, gain from their visitors a sense of life outside the slum. “They feel they're part of a larger world, not just street kids trapped in poverty, isolated and marginalized,” he says.

Cate Rooney ’08 has worked at Red Rose three times, including a stint after graduating from Vanderbilt when she lived in the slum for two months. “We were all amazed that the children at Red Rose were so interested in us.” The experience, she says, keeps you humble. “These people are the same as you, except for the circumstances.”

“Our students really understood the privilege of their education through their experience at Red Rose,” says Coste. For the Kibera kids, going to high school and on to college was “the single most important thing in their lives, and that made a huge impression.”

Apart from teaching, the Potomac kids learned about Kenya through visits to a microfinance project, the U.S. Embassy, and a boarding school. Returning home, they launched a social-media campaign to raise money for Kibera students to attend college. They netted $27,500, enough to pay for at least 13 scholarships.

“They weren't tourists,” says Ken. “They dug in. They worked in a strange environment that was different and new for them, but they connected with the people there. They realized how similar we are in our humanity, and they came back as friends and ambassadors of the children in Kenya.” 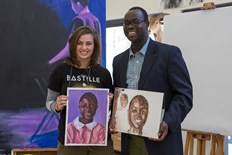 "They feel they're part of a larger world, not just street kids trapped in poverty, isolated and marginalized."