Charles Meeker is a man of few words. Compared with garrulous national politicians, the former mayor of Raleigh, NC, is notably concise, known for short speeches and speedy meetings. But his reticence with words belies his energy as a city-doer.

In the decade (2001-2011) he served as mayor, Charles brought Raleigh’s downtown back to life, revitalizing its main drag, Fayetteville Street; overseeing the construction of a $221-million convention center; and attracting more than $2 billion in private investment in the city center. He also expanded the city’s parks and greenway land by more than 50 percent to 9,500 acres, and took steps to improve the city’s sustainability, installing solar panels on city buildings and electric vehicle charging stations on streets. In 2011, the U.S. Chamber of Commerce named Raleigh the nation’s most sustainable mid-size community.

So what does it take to succeed as a local leader? “One needs to put partisanship aside,” he says. “You need to focus on things that the city can really accomplish and not worry about contentious national issues that you can’t do anything about.”

After serving as many terms as any mayor in Raleigh’s history, Charles chose to step down and let someone else lead. Today he is a full-time partner at Parker Poe Attorneys & Counselors at Law, where he represents private and public clients, including local governments. Reflecting on what surprised him about the role of mayor, he says, “In part how appreciative people really were, and friendly. Secondly, what we ended up getting done. That we would be where we are today would have been hard to imagine.” 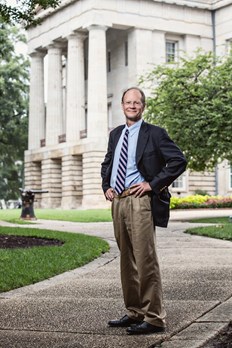 “[Local leaders need] to put partisanship aside. You need to focus on things that the city can really accomplish and not worry about contentious national issues that you can’t do anything about.”