“Absolutely incredible” aren’t words one typically associates with military deployment in Afghanistan. But Second Lieutenant Kevin Mayer doesn’t hesitate to describe his experience in glowing terms. Since August, Mayer has worked as the Assistant Officer in Charge of a Police Advisor Team, training, advising and partnering with the Afghan National Police (ANP). “The time has absolutely flown by,” he says. “I’m normally so busy that I don’t spend too much time thinking about when we’ll be heading home.” Mayer emailed The Potomac Term from the Zad District in Halmand Provice about working, wrestling and joking with the ANP.

When did you decide to join the Marine Corps? During my senior year at Duke University. It was something I had thought about doing since way back in eighth grade at Potomac. The Marines’ history, heritage and values represent everything that I wanted to be a part of, and everything that the United States stands for.

What does your typical day entail? Absolutely anything can happen. In general, I spend 90 percent of my day with the police we work with. Some days we do security patrols throughout the surrounding area; some days we focus on training; and other days we respond to reports of enemy activity in the area.

What has surprised you most about military life and life in Afghanistan? Despite all the differences in culture, language, etc., I’ve been pleasantly surprised with how strong a relationship and friendship I’ve made with the police here. We joke around, laugh and hang out, but at the same time understand the serious situation we are in. Despite our different backgrounds, we’re in this together, and we share the same risks on a daily basis, which ultimately helps strengthen our bond. Most of the time, I don’t look at working with the ANP as work at all. We operate side by side and enjoy our time together.

Have you had any particularly humorous or unusual experiences? The cops are a rowdy bunch of guys who love having a good time and joking around. Almost daily they’ll challenge me or one of the marines to a wrestling match, which is always good for some laughs. They also have this “whatever happens, happens” attitude that can make even the most serious situations funny. Being in firefights, finding improvised explosive devices (IEDs) or hitting IEDs could definitely count as unusual experiences. But at the same time, considering where we are and what we do, it’s not all that unusual.

How do you communicate with the ANP? Since I've been here, I've been able to pick up a solid amount of Pashto. Ninety-nine percent of the ANP here speak only Pashto, as opposed to Dari. By now, I've learned enough to have a decent conversation without an interpreter, and to tell lots of (inappropriate) jokes. Our team has four interpreters to help us. They're incredibly skilled linguists, so we never really run into the issue of miscommunication.

What are the best and worst things about being a Marine in Afghanistan? Best part: knowing I’m helping to make a difference here. We’ve already gained a ton of ground in the area, and the police that we work with have produced some incredible results. In the long run, the ANP will be responsible for this area, and to see them take ownership of that responsibility, and to put their lives on the line, makes it an incredible experience to work so closely with them. Worst part: I don’t really have one. So far, I’ve had an absolutely incredible experience here and have nothing to complain about. At the same time, I understand that could all change in an instant. That’s just the way it is, and everyone understands that.

Did any of your Potomac teachers or coaches influence how you feel about service? Christian Cook was my lacrosse coach for a couple years at Potomac, and we’ve stayed in close touch since then. He helped me mature a lot while I was there and drove me to excel, which in turn led to me having the opportunity to play lacrosse at Duke. He also served in the Secret Service, which I admired at the time and still do today. I can’t thank him enough for the positive impact he’s had. 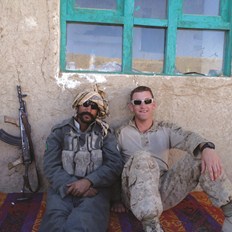 When Mayer was growing up, his dad used to say, “The best thing you can do is find where your deep joy intersects the world's deep need." Mayer remembers, "He would say that to all of us every morning when he dropped me and my brothers off at the Flag Circle because it was something his dad always told him when he was growing up. The saying definitely resonates with me, and I absolutely feel like I'm doing my best to live up to that now.”