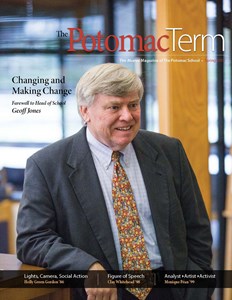 Take a long look at these photographs. What do you see? A Cambodian girl with a book. Girls in school uniforms in Haiti and Nepal. Holly Gordon ’86 sees something more: a world revolution with the potential to diminish poverty, child mortality, disease, corruption… Educating girls in developing countries, says Holly, is not just good for girls, it’s good for everyone. And that’s the point of Girl Rising, the film at the center of the social action campaign 10X10: Educate Girls, Change the World, for which Holly serves as Executive Director and Executive Producer.

A movie that aims to change the world demands a new kind of publicity, and that’s where Holly comes in. “Instead of making a film and then building a campaign right before the film’s release, we decided to turn that model on its head,” says Holly. She and the film’s policy, nonprofit and corporate partners started planning their promotional strategy before there was even a film to promote, with the goal of garnering 1 billion media impressions and inspiring 1 million actions in support of girls.

Part of their approach is to spread a feeling of ownership as far as it will reach. Sure, the film has a single director, Academy-Award-nominated Richard Robbins. But it has 10 writers and 10 stars (all women from developing countries). And if you saw the film when it debuted in March, you saw it because one of your neighbors elected to bring it to your community. When in airs on CNN in early summer as the first documentary acquired by CNN Films, it will reach and hopefully engage an even wider audience. Bringing the campaign to scale has been one of the hardest things Holly has ever done. But it’s been worth it. Why? The stakes are high — and rising.

The following is a condensed transcript of a phone interview with Holly.

My parents told me I could be anything I wanted to be, and they made a lot of sacrifices for me to have the kind of education that I had. Discrimination against women and girls doesn’t make sense to me: it’s not good for anyone.

I’ll tell you about the story of Suma. Suma is from Nepal, and at the age of six she was sold into slavery in a practice called Kamalari. For six years she labored in houses far away from her parents and was traded three different times. Ultimately she was rescued and later educated. It was during that time in the education program that she realized that Kamalari was slavery and that slavery was wrong. One of the things that I found most moving is that when Suma journeyed home after she had been freed from her final master’s house, she could no longer speak the local dialect that her parents spoke. She had been away for so long that she could no longer communicate with her parents. Today she is in school and thriving. She has dedicated herself to ending Kamalari in her community and the communities around her. She is working with the organization that first rescued her, and she is fighting to make sure that no girl or boy suffers the same kind of experience that she did.

It all goes back to poverty. If you’re in a desperate situation, you have to make decisions about your resources. Very often parents who send a child to labor in somebody else’s house as a slave do so because they think that is what’s best for her, that it will allow her the best opportunity to put food on her plate every night. It’s a short-term solution that doesn’t have long-term benefits.

Our goal is to follow the Inconvenient Truth model. What was the offshoot of that? Hundreds and hundreds of organizations focused on climate change and changes in behavior. The reason it had that impact is because global prosperity and the hope of the world is at stake.

One thing I want to make clear is that all of the girls in our film are extraordinary human beings, but what they’ve been through is actually quite ordinary. Their stories are emblematic of what millions of girls face. 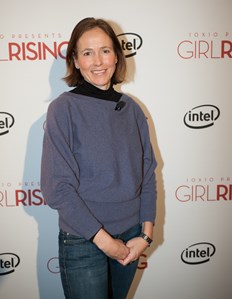 Three Things I Learned at Potomac

1. Work Hard. “Mrs. Imogen Rose taught me about hard work. Even the hardest Latin assignment — you just have to get through it. You might not always get it right, but you’ve got to keep trying. Her level of expectation was really, really high. When I say this project [the 10X10 Campaign] is hard, it’s hard the way Latin was hard. It’s really hard.”

2. Get Together. “Gathering of the community is a very powerful act. One of my best memories of Potomac is the assemblies. ‘No man is an island,/ Entire of itself./ Each is a piece of the continent,/ A part of the main.’ We used to memorize poems [like this one] and perform them at assemblies. If you think about the model of Girl Rising, it’s about taking tools and information and gathering with your community and sharing them.”

3. Give Back. “Getting a great education means you have a responsibility to the community around you. There was always that subtext at Potomac: we were being launched into life with an incredible education. We need to use that to better society.”