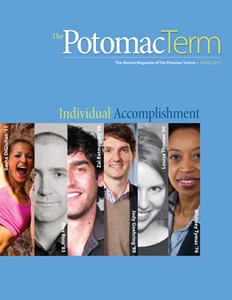 As director of operations for premium menswear label Alton Lane, Jody Goehring does business with style.

Jody Goehring ‘99 is at the helm of a revolution. His location: New York City. His title: director of operations. His mission: to make buying menswear such a tailor-made experience that the term “shopping” assumes a brand new identity.

Jody hopes to accomplish this fashionable feat by shaking up the retail industry with Alton Lane — the premium, custom menswear label he joined in March 2011. Housed on the sixth floor of an unassuming brick building in Manhattan’s Flatiron district, the Alton Lane headquarters seems less a store and more a modern, distinguished gentlemen’s lair. Roomy leather furniture, hardwood floors and a sleek, well-stocked bar provide the setting for Alton Lane's cache of custom menswear services. “This is an experience,” Jody says of a visit to the showroom. “You’re not walking into some store where you flip through the racks trying to find your size. You come in, you have a seat on the couch, and you can have a scotch or a beer. The TV is on,” he says, pointing to a flat screen tuned to ESPN, “and there are games and music.

A first-time visitor steps into a 3D body scanner that snaps close to 2000 pictures of his figure and stores his virtual profile in Alton Lane’s computer system. From there, an in-house tailor cross-checks key measurements, and the client peruses a vast selection of suiting fabrics and embellishments. Offerings include bespoke dress shirts, blazers, slacks and ties, all fitting for the label’s core clientele of young professionals who primarily work in business, finance or law. Clients can mix-and-match the colors of their collars and cuffs, opt for a mitre or no mitre, and pick their favorite hue of buttons.

Falling into the attainable luxury niche, Alton Lane’s introductory suits start at $595 — roughly 40–60 percent below other premium brands, though they boast the same quality. Several factors contribute to their relatively reasonable price point, among them Alton Lane’s elimination of the mark-ups that come with selling through high-end department stores, as well as a reliance on word-of-mouth to promote the company rather than pricey ad campaigns. Thus, Alton Lane can offer their Thomas Ogilvy Suit for $695 while a similar Hugo Boss ensemble costs about $1300, sans customization.

“Something that you’d find at Bergdorf’s or Barney’s, you’re going to find here,” Jody says, noting that the company sources high-end fabrics from Europe and invests heavily in perfecting their signature pattern and fit. The difference is that Alton Lane's appointments are as customizable as their suits. At noon, a 22-year-old analyst can have a Coors Light while he picks out a blazer; at 4 pm his managing director can watch C-Span and place an order for a tux. “They can have two separate experiences,” Jody says. That perk is drawing a growing number of clients to the custom clothier, many of whom feel overwhelmed in a traditional retail setting.

Prior to joining the 17-person team behind Alton Lane, Jody earned an MBA from the University of Chicago and was on a traditional post-business school track working in investment banking at UBS. However, when his friend, Peyton Jenkins emailed him in late 2010 about a position with the custom clothing company he’d founded with UVA buddy Colin Hunter, Jody soon traded finance for fine clothes.

Today, the University of Pennsylvania alum is responsible for managing the complex supply chain that follows a client’s order. The four-to-five-week process involves ordering fabrics from across the pond, shipping them to an expert-tailor-staffed factory in Thailand, and then sending the finished pieces to the same Massachusetts distributor that houses looks from Zara and Gilt Groupe. From there, the garments are shipped directly to a customer’s home.

Though notoriously hard to impress, the fashion industry has started to notice Alton Lane, and the buzz is palpable. A feature in New York’s Gotham magazine and mentions on websites like Forbes.com and Daily Candy have driven considerable traffic to Alton Lane’s site. A piece on UrbanDaddy.com garnered close to 300 new appointments within a day of being published. And last year, the brand earned a coveted spot on New York magazine’s “Best of List,” which recognized Alton Lane as one of the five best suiting outfitters in the city. In late 2011 the company expanded to DC, opening a showroom situated in the historic Dupont Circle building that’s also home to the East Coast’s first Starbucks.

Alton Lane recently hosted Potomac School mixers at both showrooms. The fetes not only introduced alums to the brand, but were also a thank you of sorts from Jody to the school where he and his brothers, Kirk ‘03 and Lee ‘09, spent their formative years. Jody credits Potomac with teaching him the principles he applies to his job daily, among them personal leadership and team-based results. Generosity of spirit could easily be added to the list, as Alton Lane invests 10 percent of its profits in social and environmental causes aimed at helping impoverished communities. The fact that Jody doesn’t bring this up without being asked is much like a custom Alton Lane suit. Classy.

Leah Faye Cooper ’02 holds a master’s degree from Columbia University’s Graduate School of Journalism and was a recipient of the Richard T. Baker Award for Outstanding Performance in Magazine Production. She is currently a freelance writer reporting on fashion trends and news for Time Out New York. 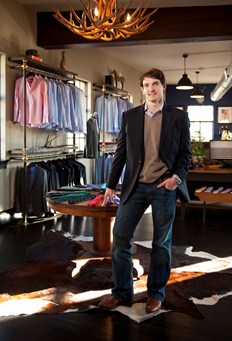 Jody credits Potomac with teaching him the principles he applies to his job daily, among them personal leadership and team-based results. Generosity of spirit could easily be added to the list, as Alton Lane invests 10 percent of its profits in social and environmental causes aimed at helping impoverished communities.