Olivia Pavco-Giaccia '12 And Christina Fennell '12: Changing The Face Of Math And Science

“Close your eyes and picture a scientist,” Olivia Pavco-Giaccia ’12 told a room full of executives of Yale’s Entrepreneurial Institute. “What do you see?”

At the time, Olivia was a freshman at Yale pitching a new science-related business venture she hoped the institute would help get off the ground. As she expected, her audience conjured exactly the image of a scientist that societal norms have dictated for years: a man, somewhat older, in a white lab coat and goggles, with Einstein-like wild hair.

Olivia has been an exception to this stereotype since she was a junior at Potomac, when she was a standout student in biology. Now, as she finishes her second year at Yale, she’s poised to start a business aimed at making the field cool and exciting for young girls.

Coincidentally, her friend Christina Fennell ’12, a sophomore at Spelman College, is launching something that, like Olivia’s business, has roots in her high school days. Recently, she began a math-enrichment program in an Atlanta inner-city elementary school that’s an offshoot of what she created in Washington during her senior year at Potomac. The goal: build the kids’ skills and point them to college majors and career fields where minorities are underrepresented.

These two Potomac alumnae are part of a nationwide campaign to boost the numbers of women, African Americans, Hispanics, and other minorities in science, technology, engineering and math, the so-called STEM fields. By one estimate, women hold less them a quarter of all STEM jobs, while African Americans and Hispanics each earn less than five percent of undergraduate degrees awarded in the related fields.

Olivia’s love of science bloomed at Potomac in Mary Cahill’s sixth grade science course, which Olivia describes as “one of my favorite classes ever.” During the summer after her junior year, mentored by Upper School science teacher Denise Reitz, she worked at a Stanford neurobiology lab, researching how alcohol targets a specific neurotransmitter in the brain, a study that earned her selection as a national semifinalist in the prestigious Siemens high school science, math, and technology competition.

While at Stanford, she created the blog “LabCandy: A Girl’s Guide to Some Seriously Sweet Science,” and wrote about her experiences, hoping to get young girls interested in the field. When she posted a photo of the bejeweled goggles she designed, girls wrote asking how to get a pair. Here, she realized, was an opportunity: fashionable lab gear could help attract young girls to science.

The idea mushroomed into the venture she dubbed LabCandy, like her blog, and presented last year to Yale’s entrepreneurship group, which each year funds and advises a select number of startups. The group loved the idea of cool lab gear for girls and chose Olivia as the institute’s youngest-ever fellow, awarding her more than$10,000 in seed money.

Initially, Olivia will develop LabCandy products for girls in roughly kindergarten through third grade. She’s creating stylish sequined goggles, flower-power printed lab coats, and storybooks that recount the adventures of one of five LabCandy animated female characters who solve problems using science. Each story will include instructions for do-it-yourself experiments that demonstrate the same scientific principles the characters use.

“I had amazing female science teachers and mentors at Potomac, who weren’t only great teachers but women I could look up to,” Olivia says. “I want LabCandy to deliver the message that they delivered to me: that the world of science is a fun, exciting, and collaborative place for young girls.”

Olivia has forged partnerships with several national organizations to promote LabCandy’s products. This summer, she is launching a major crowdfunding campaign to raise money to support LabCandy’s next phases.

Like Olivia, Christina became a champion for a STEM field while at Potomac. As a junior, she joined LearnServe International, a local social entrepreneurship organization. Having grown up in Washington, she began thinking about how she could help students in the troubled DC school system. “I was blessed to go to Potomac,” Christina says, “whereas I knew people from my church, orchestra, and elsewhere in the city were going to schools that were not preparing them for college.”

Christina’s answer: MASTERS, an after-school math tutoring program she began at Amidon-Bowen Elementary inDC. LearnServe and Ashoka’s Youth Venture, a group for young leaders of community service, provided a grant, and she rounded up a handful of friends and Potomac classmates as tutors. Together they taught foundational math skills, but they also talked with the kids about careers and showed them the importance of math in college and beyond.

Arriving at Spelman, Christina volunteered in nearby schools and found that, like in DC, math test scores were lagging. This fall, Christina, now a sophomore biology major minoring in public health, re-launched MASTERS with help from Spelman and funding from a national foundation to encourage student leadership in community service. She and a few other Spelman studentsvisit Atlanta’s M. Agnes Jones Elementary School once a week and challenge third, fourth, and fifth graders with real-world physics, economics, chemistry, statistics, and engineering projects.

Eventually Christina wants to expand MASTERS to other Atlanta schools and collaborate with similar afterschool programs throughout the country. “I would love if these students eventually pursued a career in the STEM field, but ultimately I hope they learn to value education and seek professions that help improve their socioeconomic status,” Christina says.

Though separated by nearly 1,000 miles, Christina and Olivia continue their close friendship and draw inspiration from each other. “We are so fortunate to have been supported and encouraged by the Potomac community,” Olivia says. “It’s time to try to give a little back.” 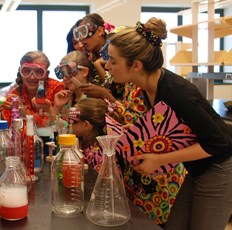 "I want LabCandy to deliver the message that science is a fun, exciting, and collaborative place for young girls.” 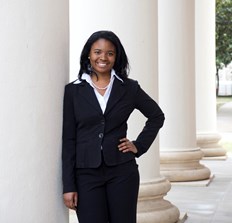 "I would love if these students eventually pursued a career in the STEM field, but ultimately I hope they learn to value education and seek professions that help improve their socioeconomic status. ”