Sweat pants instead of skirts. L.L. Bean boots instead of heels. Frostbite instead of bug bites. (Well, maybe a few bug bites.) Welcome to Colby College in Waterville, Maine, where adjusting to life as a college student and a lacrosse player means learning to cope with cold.

Despite below-freezing temperatures, Colby senior Claire Donegan has found in her lacrosse team a warmth that reminds her of home. “We always say Colby is just a colder Potomac. There’s that same sense of community,” says Donegan, who, along with Dori McAuliffe ‘10 and Catherine Kahl ‘09, helped the team post 15 wins (and only five losses) during the spring 2011 season. Their winning ways kept them among the top 10 Division III teams all year long.

But lacrosse isn’t Donegan’s only forté. A soccer player since age 4, Donegan first tested her stick skills in ninth grade, her first year at Potomac. She immediately loved learning a new sport. “It’s easier to score. It’s fast paced. And as opposed to soccer, the best team almost always wins.”

Two women loom large in Donegan’s memory of high school lacrosse: best friend Vanessa Péan ‘07 and Coach Jessica Lowrance. She credits Péan with introducing her to lacrosse before dying tragically in a car accident in 2005. “She’s the reason I started playing, and Coach Lowrance is the reason I play in college.” Lowrance mentored Donegan through four seasons of junior varsity and varsity lacrosse, and finally convinced Donegan that she was a lacrosse player — a good one.

Without that encouragement, Donegan might never have known her college teammates — women who, because of the cold or because college sports demand it, are as tightly knit as the wool in their sweaters. “College lacrosse is a lot more involved than in high school. It’s a bigger time commitment.”

But from the beginning at Colby, Donegan felt equipped for this level of intensity thanks to tough love from Coaches Lowrance, Ross McEwen and Katie Smrcka-Duffy, as well as Potomac’s rigorous athletic and academic schedule. “I was a three-sport athlete at Potomac,” says Donegan, who played basketball in addition to lacrosse and soccer. “It was a lot of fun, but it wasn’t easy. Potomac really did prepare me for college sports.”

Still, nothing quite prepares a high school team captain for the role of freshman newcomer. “It’s a hard transition,” says Donegan. “You go from running warm-ups to picking up balls.” But her recognizable skill as a player helped ease her transition. “I didn’t know if I would see playing time as a freshman, but I got to start, which was an amazing opportunity.”

The spring 2011 season brought an even bigger challenge for Donegan: an injury that sidelined her for a third of the season. Although a badly sprained ankle kept her off the field for six games, she returned in time to play in the NCAA tournament and finished the season as the fourth highest scorer on her team. “I thought this would be my year,” she says. “So to miss so many games was tough. But it was a learning experience. I learned a lot about my team’s dynamics from the sidelines.”

In the upcoming senior season, Donegan will use what she learned on the sidelines to tri-captain her team. She dreads the thought of her last game, but she looks forward to keeping up her stick skills on a lacrosse league and possibly pursuing a career in real estate. This past summer, Donegan, an international studies major, worked as a leasing intern for a real estate development company in Boston. The company confesses: it likes hiring athletes. “They like people who can work together, who know their role, who work hard and have good communication skills,” says Donegan. “I learned most of those things at Potomac.” 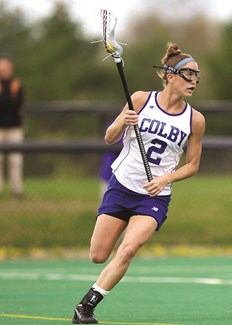 From the beginning at Colby, Donegan felt equipped for college-level sports thanks to tough love from Potomac coaches Jessica Lowrance, Ross McEwen and Katie Smrcka-Duffy, as well as Potomac’s rigorous athletic and academic schedule. “I was a three-sport athlete at Potomac,” says Donegan, who played basketball in addition to lacrosse and soccer. “It was a lot of fun, but it wasn’t easy. Potomac really did prepare me for college sports.”