Author Rohit Bhargava ‘93 Applies the Principles of Likeonomics to Politics

“Likeability” has become a political buzzword, and with good reason, according to Rohit Bhargava ‘93, author of Likeonomics. “[Y]ou cannot build trust without being likeable,” writes Rohit, a marketing consultant for Ogilvy and adjunct professor of marketing at Georgetown University. And the first principle of Likeonomics (like + economics) is truth. We spoke with Rohit about how unexpected honesty can work to anyone’s — a company’s or a political candidate’s — advantage.

The Term: In Likeonomics you talk about how businesses can use a flaw or mistake to their benefit, ultimately making them more likeable. You call that embracing an inconvenient truth. Can you apply the same principle to politics?

Rohit Bhargava: The ultimate way of using that principle is to take the thing that your opponent is likely to use against you and proactively attack it. “This is something that I did wrong, but here’s how I am going to fix it.” That’s a basic cornerstone of good crisis strategy: when you screw up, there’s no substitute for admitting that you screwed up. Nobody is perfect, especially in politics, but also in corporate America. People are willing to forgive imperfection if you are open and honest about it.

Is there such a thing as being too truthful?

We don’t necessarily want President Obama to say, “When I was sitting in that situation room getting Bin Laden, I didn’t know what to do.” He might have felt that at some point, but in leadership, I don’t think that being truthful necessarily means that you need to reveal every moment of the decision-making process or the fact that you don’t always know what to do. I do think that giving people a chance to get behind the scenes in some way can be really important. Maybe it’s telling the story of when you were starting out and how you made the decisions that ultimately resulted in who you are. Those are the kinds of stories that inspire people. I think that successful politicians do that really well.

Tell us an inconvenient truth about yourself.

I’ve been part of and launched my own failing start-ups. Sometimes you can look back at something and say, “I know exactly what I did wrong, but at the time I was doing it I thought it would work.” I’ve had more of those situations than I care to admit.

Is there an inconvenient truth that Potomac should embrace?

Any school wants to talk about its successful alumni, the ones who have done something really cool or interesting, because you want people to feel like they’re part of a history of success. We as a culture are very good at celebrating success, but we are not very good at celebrating the failures that led to the success, which is why in the marketing and business world, you don’t really read case studies of failures. But when you ask someone about the moments in their career when they learned the most, it’s usually not the successes, but the failures.

When we focus so much on celebrating success, we don’t give our younger generation a real sense of what it takes to be successful. Also, we sometimes create this unrealistic expectation of success, that now that you’re part of this School, you have to be successful. Facebook, for example, is this 24/7 parade of successful celebration moments. People are posting status updates about getting married and going to Hawai’i and having these amazing times. Nobody’s posting in their status update, “Man, I feel really lonely today.” For someone who is younger, who is surrounded by that, it can create a sense of insecurity about not being happy all the time.

How did Potomac influence your career path?

I was at Potomac from 8th grade through 12th grade, and that was the time in my life when I was starting to discover that I had a passion for writing and English literature. In my family, people had very technical types of roles and careers. They were in business, and I was writing screenplays, and studying poetry and Shakespeare. Even though I ended up in a career in business and marketing, I use my passion for things like literature and philosophy and even poetry and screenwriting. I use those all the time in brand storytelling. There’s a very close connection. I’ve written about, for example, screenwriting and what it can teach people about being better marketers. That all started while I was at Potomac. 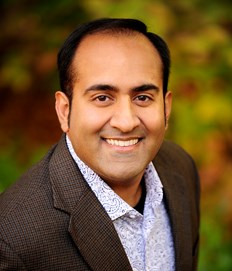 "In my family, people had very technical types of roles and careers. They were in business, and I was writing screenplays, and studying poetry and Shakespeare. Even though I ended up in a career in business and marketing, I use my passion for things like literature and philosophy and even poetry and screenwriting. That all started while I was at Potomac."