Potomac honored nine Potomac Speech and Debate Academic All-Americans. The four seniors and five juniors were presented with their certificates.

We recently introduced peer grading in our Upper School Speech That Matters class. Here, speeches are given to audiences, not a teacher. We use a peer grading system to assess speeches. Students know they are accountable to each other.  It has turned out to be a powerful tool in the class.  Every speech gets an oral critique from the class as well.  It creates an environment where risk taking works and failure is OK.  It also holds students accountable to important speech making practices like eye contact, or verbal command of an audience.

In the short term, most debaters will notice that debate will help them in the classroom. Over the long term, debate significantly increases the success rate of college applicants. Most debaters are “hooked” once they compete at their first tournament, and the activity promotes and teaches many of the same virtues of a competitive sport, such as the importance of diligence and teamwork.

The most common reason that students compete in Speech and Debate is that it’s fun! If that strikes you as odd, consider these thoughts: 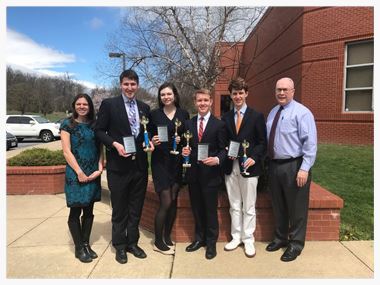 1) You will make friends at other schools all over the metro area and the state of Virginia. Eventually, your friend base will grow to include students throughout the nation. Only in debate to you get to know and become friends with your opponents!

2) We travel all over the country to compete. The more successful you become, the more opportunities you will have for travel.

3) Outsmarting your opponents provides a sense of accomplishment, especially given that public speaking greatly scares many people!

4) If you like competing, then this is an activity for you. Debate is as competitive as any sport!

5) You get to spend time a group of really smart, cool people who will make help you become even more intelligent.

6) Only in speech and debate to you really get to “Suit Up” and love it.

Speech and Debate is an activity that allows for continual self-improvement.

1) This is a life-changing experience. You will become a profoundly stronger student and more effective at any profession in the future because of a speech and debate background. A 2015 Pew Research study shows that 90% of American adults said the best things to learn in school to get ahead were communication skills, logic, writing, and teamwork—exactly the skills we teach in speech and debate! Plus, during the 2021-21 school year, nine Potomac School students were named Academic All-Americans in debate!

2) There are lots of college opportunities and scholarships in Speech and Debate!

• Colleges naturally recruit Speech and Debate students at a higher level than athletes.

• Did you know the University for Alabama has won more national debate titles (19) than national football titles (16)?

Speech and Debate is for everyone, not just future lawyers!

What is Speech and Debate like at Potomac? Potomac competes in several styles of debate. Public forum and worlds schools debate are the common forms. Public forum debate involves teams of two students debating a topic that has been researched for a month before competition. Worlds schools debate is involves teams of three students debating both prepared and impromptu “Parli” styled motions. After school practices consist of skills development, scrimmages, research, and a lot of conversation!

What kinds of topics are debated?

The topics are very timely and reflect what students and families might read about or see in the news.

Does Speech and Debate count as an activity or a team sport credit?

Students who participate in debate in both the fall and the winter have the opportunity to do an athletic independent study for one season and receive an activity credit for the other season. Alternatively, some students choose debate in the fall and then play a sport in the winter, and vice versa. However, the most successful debaters tend to be those who compete in both seasons, and most of our returning debaters plan to compete in both seasons next year.

What if my student has no previous experience?

Everyone begins as a novice, and we welcome students from all Upper School grades. Finding one’s voice competing is the first challenge. After that, learning debate is pretty simple.

The debate team functions just like a sports team in that we have daily practices and two weekend tournaments per month. Practices are daily from 3:30 to 5:30 pm (with some Wednesdays off).

What kind of student makes a good debater? Is debate “too academic” for my student?

There are lots of ways to be a great debater, and our debate team includes many different personalities. Generally, the best debaters are people that are intellectually curious, can think critically about a topic, and are competitive by nature.

Speech and Debate Competes at University of Florida

The Potomac School Speech and Debate team competed at the University of Florida this past weekend, producing five place winners and four semifinalists in various events. The tournament featured roughly 150 schools from 24 states and a large turnout of big Florida speech and debate teams.

Potomac’s Speech and Debate team has earned a number one state ranking from the National Speech and Debate Association (NSDA) after competing in three early-season events. The Panthers took the speech championship at Duke this past weekend, while finishing third overall in debate events. The team was paced by a championship performance from Hannah de Souza ’25 in oral interpretation. The varsity debate team of Sophia Calkins ’24 and Armaan Sethi ’26 finished fourth, and the novice team of Cabot Fisher ’26 and Aidan Trapasso ’26 earned a second-place finish. Finalists in the speech tournament included Taylor Burris ’24, Elizabeth Forster ’24, and Abigail Woldgebriel ’24. Complete results for the team this season can be found here.

Speech and Debate Named to Top 100

Out of more than 3,000 schools nationwide, The Potomac School’s Speech and Debate team is ranked #88, placing them on the National Speech & Debate Association's (NSDA) Top 100 list. The team is recognized for their overall excellence and exemplary participation during the 2021-22 competition season.

In addition to being recognized for one of the nation's top speech and debate programs, Potomac earned membership in the NSDA's honor organization, Societe de 300. This award reflects outstanding commitment to teaching students essential life skills – including communication, research, listening, writing, and organization.