A longtime art teacher tours the art and architecture of this crossroads of the ancient world.

Ida Ashburn Cook has been teaching art and art history at Potomac for more than 25 years. Last summer, thanks to a Potomac professional development fund created by Potomac parents Jeff and Linda Fine, Ida had the opportunity to visit Sicily. She spent two weeks exploring this Mediterranean crossroads, studying the art and architecture of the pagan, Christian, Jewish, and Muslim people who have left their mark on this beautiful island. 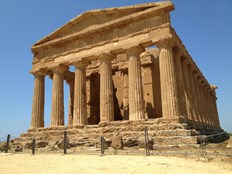 “The Fine Grant is so gracious,” Ida says. “Traveling to Sicily was something I always wanted to do because I had a lot of questions about its complex history. The trip helped answer some of my questions, and it certainly inspired deeper study.”

Ida, who teaches art history as well as ceramics, painting, and drawing, visited Greek temples, Roman quarries, Byzantine churches, and comprehensive archeological museums. She found the sophistication of some of the ancient sculptures, frescoes, and mosaics amazing. She was also reminded of how much we have in common with those who lived so long ago. Pieces of Neolithic pottery, made over 3,500 years ago, shared characteristics with her students’ ceramics.

“We’ve inherited a lot of technology and sophistication,” she says, “but if you give someone the raw medium, they’ll often make something similar to what was being made in ancient Sicily. The design of bowls, vases, and cups hasn’t changed substantially, even in how we might choose to decorate them. Our very human sense of proportion and our understanding of form and function hasn’t changed all that much over 5,000 years.”

Asked to start an anatomy class, Gretchen Bauer used a Potomac grant to design a course that threw out the traditional model of instruction.

Last spring, the Upper School science department polled juniors about the next year’s senior electives. When the students asked for an anatomy and physiology class, a course Potomac hasn’t offered in several years, Gretchen, a biology teacher, was asked to build one from the ground up.

She assembled the blueprint over the summer, with the help of a Potomac curriculum grant. Traditional anatomy instruction focuses on each part of the body in relative isolation; students might study the heart in one unit, the lungs in the next, but they seldom see how the two interact.

Gretchen instead wanted to teach about the body as an integrated system and focus on the interrelationships of each part of the body. “The smallest changes in one part may have an impact on four or five others,” she says. “I wanted to teach how the body’s components work together, reinforce each other, and sometimes even cancel each other out.”

The resulting course features units that revolve around complex themes, each of which lead students to explore multiple systems within the body. Early in the year, the class examined how the body receives, processes, and responds to information, a study that led them to explore the inner workings of the body’s vision, nervous, and muscular systems.

Such an approach offers Gretchen ample opportunity to tie in real-life health issues. Students for example, will study body’s response to chronic stress, including increased blood-sugar levels, decreased immune function, and decreased brain activity for emotions, which can lead to depression.

“In a traditional course, you can get lost in just the memorization of anatomy,” Gretchen says. “Asking students to pull things together from the various systems is a different mental model.”

GETTING SOME FRESH AIR—AND A FRESH TEACHING APPROACH

Researchers in Europe have long argued that students learn better in the outdoors. They say that the sensory and tactile experience of being outside, moving around, and working with physical objects make a lasting imprint on a child’s memory. Learning, in other words, can take deeper root outside than it would within the four walls of the classroom. 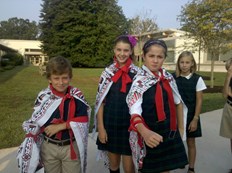 To learn more about this approach, Kate attended a course organized by the Kinda Education Centre in Rimforsa, a rural village in Sweden dominated by lakes and forests. She was the lone American in a group of 18 educators from 11 countries.

As part of her program, Kate, who’s been teaching for 13 years, visited two schools that hold all their classes outside. The lessons, she says, were creative but simple. In one class, students ran to collect a math problem pinned to a tree, solved it, then ran to get another problem at another tree. Kate and the others also spent a few days in the city of Linköping exploring strategies for outdoor education in urban contexts.

Since returning to Potomac, Kate takes her students outside at least once every day. In one early lesson, they used ropes to create maps of the world and Europe on the grass. “Even if you have to be inside for a lesson, a few minutes outside gets them in the right frame of mind,” she says. “They come back in more prepared to learn.”

When her class turns to the study of medieval Europe, she adds a new angle to the class's study of pilgrimages, emphasizing the traditional one to Canterbury Cathedral, which houses the shrine to Thomas Becket, the saint and 12th-century archbishop of Canterbury. In November, Kate’s students take the pilgrimage themselves—in the woods on campus. Teachers meet them along the way, assuming the role of innkeepers and storytellers and offering comfort, lodging, and tales about Becket. “It becomes an actual journey for them,” Kate says, “which means they discover greater connections to the history and have a more memorable experience.”

PUT TO THE TEST

Tricia Crowley entered the summer knowing that big changes were in the works for teachers and students in AP Spanish Language and Culture. The first course curriculum change since 2007 and a new exam would emphasize less content knowledge and more language and analysis skills—particularly students’ ability to comprehend primary sources, such as news broadcasts, web podcasts, and recordings of everyday conversations.

“There won’t be fake dialogues anymore,” says Tricia, who taught at Potomac from 1989 to 1993 and returned this year after 12 years at Miss Porter’s School in Connecticut. “Everything will come from authentic sources.” Students, for example, may be asked to listen and report back on a recording of a conversation in a train station, complete with the sound of whistles, iron wheels on tracks, and other background noises.

To familiarize herself with the changes, Tricia used a Potomac grant to attend a workshop offered last summer by the College Board, which develops AP tests and curricula. Tricia learned about the goals of the changes and previewed nearly a dozen textbooks released in conjunction with the new AP approach. She selected Temas, a textbook designed by college-level scholars, including Parthena Draggett, co-author of one of the unit modules for the revised AP course.

Temas, an advanced-level text with an online practice component, has proved a powerful vehicle for teaching the new skills required in the course. It offers a wealth of online recordings from a variety of Spanish-speaking countries, exposing students to a number of dialects. Students record and post oral presentations from home, which means Tricia can assign them more frequently without cutting into precious class time. Two students also can conduct and record a conversation online from their homes.

“This hits kids exactly where they live,” Tricia says.

Becca Mahoney did similar work during the summer to freshen her AP US History class, particularly its study of the 1960s. “The kids see the ’60s as a period of radicalism and student protests,” she says. “I wanted to show them the complexity of the time.” She decided to bring the Civil Rights Movement, the Cold War, and the decade’s crises in leadership into focus for her students.

With funding from Potomac, Becca enrolled in an online class on the 1960s offered by the Gilder Lehrman Institute of American History, which gives high school teachers the chance to learn from top college scholars. Her class was taught by Georgetown’s Michael Kazin, an expert on U.S. politics and social movements, and Ohio Wesleyan’s Michael Flamm, author of several books on the 1960s.

With some 30 other teachers from around the country, Becca explored a range of primary sources that could be used in lessons and to give students practice on DBQs (a common abbreviation of "document-based queries," which increasingly make up the core of the AP History exam). “The more work I do on DBQs with students, the better,” she says. The course also introduced her to photos and documentaries that have helped her expand the range of visuals she uses in lessons.

One new primary source offered Becca the perfect illustration of the complexity of the 1960s to demonstrate to students. In a May 1963 letter, President John F. Kennedy asked civil rights leaders to hold off on approaching protests. Though he was a supporter of the movement, Kennedy was pushing a minimum-wage bill and wrangling with a nettlesome Congress at the time. Through his letter, students see the intersections of a host of different issues.

“Students realize what Kennedy was up against,” Becca says. “He was dealing with a lot of competing interests and different goals.” Her classes learn that politics in the 1960s, like most things in that time, were anything but simple.

At a prestigious institute at Columbia University, a new elementary teacher learns how best to teach reading

Patricia Edelmann came to Potomac this fall after three years in the Fairfax County public schools. But before stepping into her third grade classroom, she headed to New York City for training in a highly successful program focused on teaching reading.

Over the past quarter century, the Teachers College Reading and Writing Project at Columbia University has worked with more than 150,000 teachers in weeklong institutes. Founder and director Lucy Calkins is a renowned expert whose books on teaching writing are used in thousands of schools nationwide.

All teachers in Potomac’s Lower School are trained to use Calkins’ program, and some attend institutes several times to build on what they learn. Thanks to this unified approach to reading instruction, the faculty can build a true spiral curriculum that starts in kindergarten and works its way through third grade.

At its core, the Lower School program aims to foster critical skills and a love of reading by immersing students in all types of books. “By the third grade, they know how to read the words on the page,” Patricia says. “We want them to go deeper into the text and stretch their thinking.”

During her week at Columbia, Patricia spent her mornings in sessions with Calkins and other leaders of the project discussing principles of effective instruction. In the afternoons, she and around 15 other teachers worked with a veteran teacher who had spent more than a decade in the classroom using Calkins’ approach. These were hands-on sessions in which Patricia learned how to craft lessons that emphasize a single, discrete reading skill.

Back at Potomac, she’s using her summer work to develop lessons that aim to build students’ skills in reading comprehension. One day, her class might talk about how to visualize what they read; the next, they might work on summarizing a story plot. After each lesson, the kids spend as much as half an hour reading a book of their choice. As they read, they focus on that particular skill and confer with Patricia as they put it in practice.

The resulting discussions and learning are rewarding for a teacher new to Potomac’s approach. “It was so nice to have the foundation of that summer work coming in,” Patricia says. “In a short time, I learned the principles of the program as well as how to build the lessons to support them.”