Read what our SEA students are thinking and doing this year at Potomac.

Potomac Partners with the Smithsonian 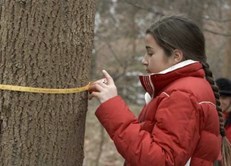 Potomac’s campus has been designated a Smithsonian Institution biodiversity monitoring site. Our students are learning to map the area, identify species and collect data as the School participates in this worldwide program. Created in 1986, the Smithsonian’s Monitoring and Assessment of Biodiversity Program helps assess and monitor biodiversity around the world. Smithsonian scientists work with governments, nongovernmental organizations, academics and community groups, training individuals to collect data on species growing in their area, concentrating on temperate and tropical forested regions.

Working with science teacher Mary Cahill, Smithsonian scientists selected and surveyed a one hectare plot in the wooded area adjacent to Pimmit Run. Then Smithsonian scientist Jennifer Buff came to campus to instruct Ms. Cahill’s seventh grade students on the proper way to map and identify the tree species in Potomac’s plot. Tramping through the woods on a chilly fall day, students began mapping and tagging the trees in the first quadrants. Mapping is continuing. Eventually, students in all divisions will be able to use this plot to study biodiversity and design projects for their science classes. The ultimate goal of the program is to foster the use of sustainable natural resources.

The Green Schools Alliance (GSA) is a partnership of K-12 public, parochial and independent schools uniting to take action on climate change and the environment. Partner schools pledge to reduce their carbon footprints. Each school benchmarks its energy usage and initiates actions to begin reducing carbon emissions.

Comprised of students, teachers, parents, school heads and administrators, business officials, facility managers, trustees and school boards, and staff from a host of schools in 32 states and several foreign countries, GSA works to ensure a safe and healthy environment for future generations through the implementation of sustainable, energy-smart solutions.

The GSA is a program of GEO: Global Environmental Options, a 501© (3) non-profit organization that was founded in 1994 as an outgrowth of the “Greening of the White House” initiative, the first major gathering of the green building community around one project.

Mission: The Green Schools Alliance was created by schools for schools and is working with and through schools worldwide to take action on climate change and the environment.

Sponsored by the Green School Alliance and the National Conservation training Center, SC3 was started to empower outstanding student environmental leaders with the skills, knowledge, and tools necessary to address natural resource conservation challenges and better serve their schools and communities. Two members of Potomac's own Students for Environmental Action have attended since the inaugural congress in 2009.

Upper School student Madhu Ramankutty '11 (pictured first on the left) was selected by National Geographic's JASON Project as one of nine student 2008 National Energy Argonauts. Following in the footsteps of Potomac student Roz Fennell ‘08, who studied the bayou and nutria in Louisiana, Madhu first attended a "boot camp" where she met Mission researchers, learned the protocols for scientific investigation, and participated in team building exercises. Since then she has participated two missions: First Seattle, Washington at the National Oceanic and Atmospheric Assoc., researching the transference and transformation of energy specifically associated with Tsunamis; then second, in Houston, Texas at the Johnson Space Center researching the future of efficient energy use. Her fieldwork as been captured in multimedia and print and helps form the basis for the JASON Project curricula across the nation. Even when not on missions, Roz, Madhu and all the Argonauts continue as mentors and role models to the entire JASON community 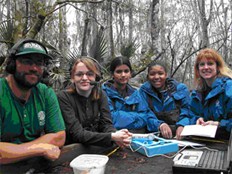 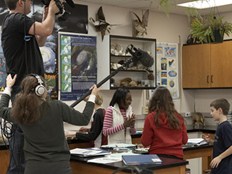 For 17 years our Middle School (MS) students have participated in the JASON project, a multi-disciplinary research initiative directed by renowned scientists to inspire in students a life-long passion for learning in science, math, and technology.

National Geographic, a sponsor of the JASON project, filmed MS students on campus in 2007 as they completed an activity on hurricanes and buildings designed to withstand them. The completed CD is available to science teachers as part of the JASON curriculum program.The JASON project was founded in 1989 by explorer Dr. Robert Ballard and was named in the spirit of the Greek myth of Jason and the Argonauts.

Every April for the last four years, Potomac has conducted an e-waste drive for the Potomac community. Boxes in every division slowly fill up with smaller items that students bring from home, while larger items can be dropped off on a designated day at the end of the month. Turtle wings then picks it up and responsibly recycles it. So far our community as recycled an averaged 3 tons a year!

More recently, the Technology Department, with the help of Upper schoolers for Fall Community Service Day, packaged up close to three tons on its own. 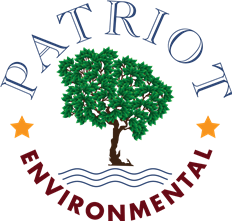 Patriot Environmental has been a partner for several years and we are proud to use two different evironmentally friendly products they provide. Orion 5000-EL Fuel Additive helps clean, protect and lower operating temperatures in combustion engines, and does so for all combustion engines maintained by the school.

In 2011, Patriot Environmental and Potomac, led by our very own eletrical engineer Mike Pettit, installed a USES power conditioning unit which lowers our consumption by helping us use incoming energy more effeciently . The unit was installed on our central plant in August of 2011 and lowered our consumption by roughly 10 percent. We have already begun looking at additional sites for implementation.

Thanks to Potomac's own Students for Environmental Action, compost has been collected from the dining room for the past four years. We are proud to now partner with Organic Waste Haulers (OWH), who manages our compost. Students and faculty separate their compostable waste, that is then processed by OWH.

Battery Solutions is Our Solution for Recycled Batteries

Potomac has been working with Battery Solutions for four years to recycle numerous kinds of batteries. All community members can bring their batteries in and place them in the collection tubes in the public spaces of each division. When the Tubes are full, Students for Evironmental Action (SEA) in that division makes sure teh terminal ends of all the batteries are taped; the batteries are packaged up in the postage paid shipping containers provided and off they go! Once the batteries are recycled, that division received a certificate of responsible recycling.

Bartlett Tree Experts have been helping our community manage our favorite trees for 22 years. Our Gumtrees and Holly trees are doing great in their care. In addition, they have been a staunch supporter of our efforts to reclaim our own fallen or dead hardwoods on campus.