Growing up outside Boston, John Kowalik gathered with his family every night at the kitchen table for dinner. He was the youngest of six children born to Joseph and Gertrude Kowalik, products of the Great Depression and members of what Tom Brokaw famously described as “The Greatest Generation.” His mother managed the house and kept tabs on the kids; his father, a Navy veteran of World War II, worked for Gillette Corporation for 37 years. “He started out as a blue-collar guy and worked his way up,” John says. “He was not a senior manager, but he was an inspiration for us in terms of the value of hard work, loyalty, and commitment.” There was always much laughter at the Kowalik dinner table, and stories about the day’s ups and downs flew back and forth between family members. “There was a lot of talk about how things should be done—and how they should not be done,” John says. Even just his father’s presence taught him something. Joseph Kowalik left the house each morning before anyone else was awake, so that he could return home in time for dinner. “He was there almost every night, and that was pretty significant,” John says.

His parents’ sacrifices paid off. An Eagle Scout as a teenager, John became captain of the football and indoor and outdoor track teams at Williams College. At 26, as just a third-year teacher, he stepped into a job as assistant headmaster at the Delbarton School in Morristown, NJ, leading the athletics and student activities programs while helping with faculty recruitment. He also took the reins of the football team and earned nine conference titles and two state championships while becoming the youngest coach in New Jersey history to record 100 wins.

Here, he talks about his life and his years in education:

John Kowalik on Education and Leadership

WHO WERE YOUR EARLY ROLE MODELS?

Primarily, my parents, older siblings, and some of my teachers, coaches, and Scout leaders. My father died when I was a junior in high school, and I was fortunate to have a number of wonderful teachers and coaches who set me on my path for life. At Williams, Dick Farley was a tremendous influence. He was a football coach at Williams who wound up in the College Football Hall of Fame. He was also the varsity track coach, so I spent three seasons a year with him for each of my four years. I still talk to him today.

Coach Farley was a seasoned educator who approached life in a disciplined way; he was focused, cared deeply about the kids, and took his responsibilities very, very seriously. Early one Sunday morning, I happened upon the coaches in their offices, analyzing game film. I asked Coach Farley why they were in so early, and he said: “This is what we do. We want to give every player here the opportunity to succeed.” I realized that he was making a sacrifice, giving up his Sunday for his players. That stayed with me. It’s the trademark of good educators: they do whatever it takes to put students in the best position to succeed in life.

How did you first move into a leadership role in schools?

After college and a year at Procter & Gamble, I was teaching at Delbarton School with every intention of going back into business. During my third year there, I was accepted at the Tuck School of Business at Dartmouth. I intended to go, but the headmaster approached me about staying at Delbarton to become an assistant headmaster and run athletics and the student activities program. I was only 25, and I had my doubts about whether I could do the job or whether I even wanted to stay in education. But he saw something in me that I couldn’t yet see in myself, and he recognized my joy in being in a school day to day.

What has sports taught you?

Prepare, practice, compete and have fun. When you compete, you lose sometimes, and those defeats teach you a lot about yourself and what it takes to succeed. Talent alone doesn’t translate to success. If you’re not motivated, if you don’t have the right attitude, if you’re not willing to make sacrifices, you won’t succeed. Pretty much the same formula applies to success in life. Sports have also taught me humility. Williams has a very good Division III sports program, but Dick Farley used to quip: “You’re in Division III because there is no Division IV.” Whenever he said that, I felt like he was speaking to me!

You spent one summer in the executive program at Dartmouth’s Tuck School of Business. Why?

I earned a master’s degree in educational leadership from Columbia, but I had always wanted to think more broadly about leadership and management. Tuck allowed me to stretch and put myself in a new and different environment. Typically, people learn and grow most when they’re navigating the unfamiliar. My cohort at Tuck was wonderful and diverse. There was a manager of a multinational corporation headquartered near Mexico City and a woman who ran the largest law firm in the Czech Republic. Someone else headed up a large mining operation, and there was even someone who ran logistics for the U.S. Navy in the South Pacific. Suffice to say that there was an abundance of talent and a wealth of experience for me to draw upon!

What struck you most about the experience?

I was impressed at how these executives discussed and managed change. Given how quickly the world is changing, and how new technologies bring on change incredibly fast, people and institutions must be committed to learning and growing. A good business executive or school administrator has to be continually learning. Obviously, as an educator, I embrace learning, but I appreciated that the Tuck Program and these world-class executives affirmed the importance of it throughout life.

What books about leadership would you recommend?

Jim Collins’ "From Good to Great" would be my first choice. It’s a study of companies with performances that jumped from merely average to great, and then remained at those high levels for at least 15 years. His research takes a deep look at the ingredients of sustained excellence, and leadership is clearly a key factor. Most people in education shy away from corporate thinking, but good leadership translates to the nonprofit world and schools. Collins’ book has gained traction in the world of independent schools. The emphasis for any leader has to be on quality, identifying and organizing talent, and doggedly pursuing your mission.

How do you teach leadership skills to kids?

With our own children, my wife, Carolyn, and I talk more about values and traits than about leadership. But you’re working from the same sheet of music. You want children to value effort and attitude. You want them to respect and treat people well and put others first. If the result is leadership, that’s terrific. Regardless, you want to try to get them on the road to a successful and purposeful life.

Is it even possible to teach kids to be leaders?

Some people suggest leadership is hard-wired. Others argue that it can be learned. I don’t think science or research can settle this question definitively, but I do know this: If you create a culture that values the character traits essential to leadership—things like humility, hard work and resiliency—good things will happen.

I believe those traits are an integral part of Potomac’s education program and culture. By the time our students graduate, they have had many opportunities to learn and practice leadership, and they know what it takes to make good decisions and be strong leaders. 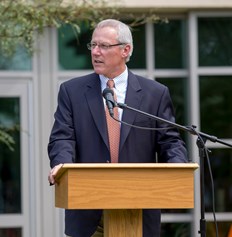 John Kowalik became Potomac’s 14th Head of School in 2013 after a decade as Headmaster of The Peck School in Morristown, N.J.

Raised in the Boston area, John is a graduate of Archbishop Williams High School in Braintree, Massachusetts, and a member of the school's athletic and academic halls of fame. At Williams College, he majored in political science and captained teams in football and winter and spring track. He also has completed the Executive Management Program at Dartmouth’s Tuck Business School and earned a master’s degree in educational administration from Columbia University.

John spent 19 years at Delbarton School in Morristown serving as teacher and later Dean of School and Assistant Headmaster. As head football coach for 16 years, he compiled a 138-29 record and won two state titles and nine conference championships. During his tenure at Peck, the school maintained a rigorous academic program distinguished by excellent teaching and developed a nationally recognized character program.

In 2009, Williams College profiled John in one of its publications.

John and his wife, Carolyn, have four children: Jack, Liza, Mark, and Sara.